I’m pretty sure UK kayakers have been missing a trick with Mexico. It’s amazing. Tom, Pete & I headed over to Veracruz for 3 weeks in January. We did the classic fly and hire routine, being entrusted with a brand new Dodge something or other that was huge!

It was fairly difficult to gather river information in the UK. I spoke to some Yank friends of mine, brought a guidebook from the 90s and read some blog posts which gave me much more of an idea. Being a lover of plans & maps I was concerned that we didn’t have much of a plan and that we could fail to achieve anything, but at every turn we landed on our feet and found the right people.

Firstly we headed over to the Rio Antigua and met some over excitable Canadians, then up to the roadside section of the Alseseca and then further North up to the Micos, El Salto and the Santa Maria. These are all classic sections, not unlike steep creeking in Italy but warmer and taller.

Arriving back at the Aventurec near the Alseseca, we were extremely happy to find the water levels had not dropped and hatched a plan to overnight on the Alto Alto Filo. The run was two easy days. The morning on the first just being the drive in over an impressive mountain range. There were some great rapids on this section and had a pretty sweet night out. It didn’t have the big waterfalls of the previous rivers but was a bouldery adventure.

Feeling fired up and other such clichés, we felt it time to run the Big Banana section we had heard so much about. Failing to find the correct access road on the first day we abandoned our plans and decided to enlist some local help. We abandoned our plans on the second day because our local help sent us in the wrong direction. On the third day we reached the start and began. 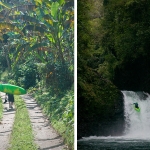 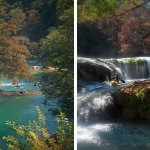 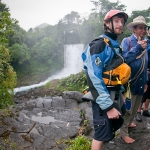 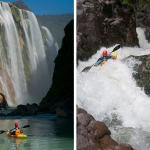 I pulled myself back from the edge of the drop and looked back at the lead in. Not an easy feat on its own without a 45 foot drop at the end of it. Tom & I watched Pete launch over the drop with characteristic style and decided that I’d go next. On the walk back to my boat, my mind wandered over how we’d got to that incredibly remote location. That was our third day searching for this particular stretch of the river. The infamous Big Banana section of the Alseseca.

The first day we didn’t even find the correct road to the village marking the start of the track down to the river. We gave up early deciding that we should probably ask our new friends at the camp site for accurate directions. For the second attempt we had found a chap in town who had been there several times with the Hotel Charlie team. We were confident. We got to the village and started on the 90 minute walk in. The instructions were simple enough: down the track, stick left and follow the sound to the big drop at which the section starts at below. That attempt failed after hours of searching, lost tempers and hacking through the jungle. We left our boats in the bush and retreated back to the camp site.
The third attempt we recruited our newest best friend, the owner of the camp site. He drove the truck for us and then brought one of the local farmers along to help us find our way. Turns out we should have gone right instead of left.

The drop looked significantly bigger as I took my last stoke off the lip than it had done 5 minutes before from the same position! At the bottom I met up with Pete and he had a photo I was dead happy with, seemed to make a terrifying situation better! I looked around, Pete and I were walled in deep and Tom was about to join us.

I wondered how far vertically I had dropped so far that day. There had been the first big drop that was a straightforward boof, not overly complex but plenty of water to backloop an Everest. There were a few smaller ones and then the must run we had heard a lot about. Tom was able to jump out on the lip to capture some footage for the up coming Means of Production 2 and committed Pete and I into running it. It’s often nice when the decision to run something is taken away from you. Either a trusted friend has looked at a rapid and decided for you it’s good to go or you have no choice but to run it. The decision is often the hardest call, once you have made it it allows you focus down on the portage or what you need to do to navigate the rapid. The must run was great fun!

We had heard about the Rio de Oro from a couple of friends we had made along the way. All we knew was that it was an excellent river in which the run ends in the sea, and the only directions are to find a chap called Fernando who will take you to the river. It (as per usual) worked out perfectly, sleeping a night on the beach and then paddling the river. I properly hurt my back near the end, which I can only described as the worst pain in my life ever. (Not that I’m overly dramatic!) Tom’s handy supply of painkillers kept me from crying all the way home, where the snow, sleet and ice were still dominating the Welsh landscape.

We only explored a handful of the rivers in the Veracruz region, there is so much to do out there and once you get over the air fare it’s all as cheap as chips. I will certainly be heading back!

Tom on the Micos 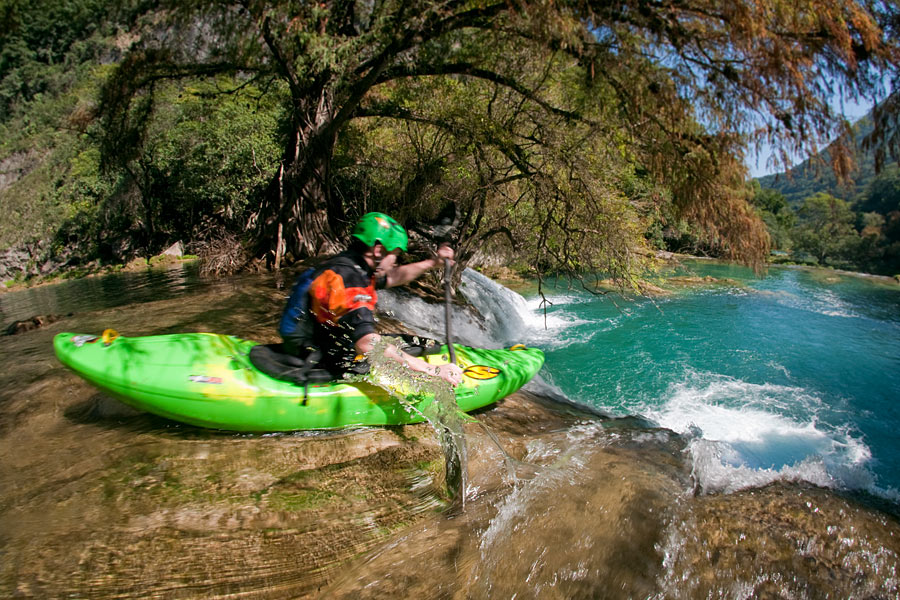